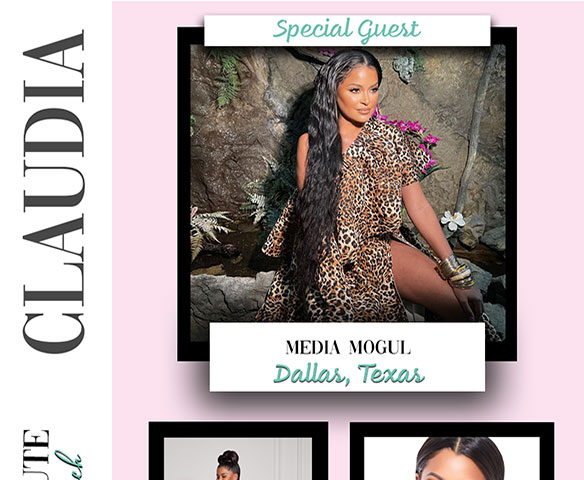 Meet special guest speaker Claudia Jordan. Voice for the underdogs, talk show Host, actress, model, radio/tv personality, activist and motivational speaker, Claudia Jordan is no stranger to the media masses. Claudia got her start as a reporter for the Providence American Newspaper in Providence Rhode Island before going on and winning the title of Miss Rhode Island. After placing in the top 10 at The Miss USA Pageant she was off to Los Angeles! From her beauty pageant beginnings to bold and charismatic talk show host Claudia has done it all! She’s starred in and produced the film Dear Frank starring Columbus Short and Brian White and also was a stand out in season 7 of Bravo’s Real Housewives of Atlanta. Claudia has also been a fixture on the radio airwaves- as she’s co-hosted the Nationally Syndicated Rickey Smiley Morning show before she earned her own morning show The Morning Rush in Dallas, Texas.

Claudia also was part of hit game shows like “The Price is Right (CBS), Deal or No Deal (NBC), Celebrity Apprentice and Celebrity Apprentice All Stars(NBC)” which lead to Jordan being tapped to co-host the Miss Universe Pageant with Billy Bush. Claudia can now add one more credit to her resume as she has become the official reunion host for one of VH1’s biggest franchises, Love and Hip Hop. The media mogul can now be seen on Fox Soul hosting on the streaming network’s two top shows, Cocktails with the Queens & TEA-G-I.F (which she created). And she’s also flexing her producing muscle by executive producing TS Madison’s new highly rated variety show Turnt Out With TS Madison on Fox Soul.